St. John’s, Newfoundland and Labrador, June 3, 2022 – Atlas Salt (the “Company” or “Atlas” – TSXV: SALT) is pleased to report that additional results from its ground gravity survey have led to the modelling of a potential second salt dome just 3 km east of the large Fischell’s Brook Salt Dome deposit (refer to May 26, 2022, news release).

·         Geophysical interpretation of the gravity data has modelled a deeply rooted salt dome of vertical cylindrical shape at Fischell’s Brook East with a diameter of 1.5 km and an average density of 2.35 grams per cubic centimeter;

·         Fischell’s Brook East has never been previously drilled. It appears to be a separate structure from the main Fischell’s Brook deposit but the two structures could potentially be connected at depth – further exploration would be required to confirm this;

Mr. Rowland Howe, Atlas President, commented: “The possibility of a second salt dome adjacent to Fischell’s Brook, suggested by this gravity data, is further evidence of very significant salt accumulations over a broad area of the Bay St. George Basin.

“It is rare to see such an advantaged salt asset as Great Atlantic – massive and relatively shallow, high-grade, homogeneous and immediately next to a deep-water port. It is also very exciting to see what’s unfolding to the south in the Fischell’s Brook area, and how these salt domes could help anchor a potential clean energy hub,” Mr. Howe concluded.

As Atlas progresses toward completion of a Feasibility Study for its flagship Great Atlantic Project approximately 15 km north of Fischell’s Brook, the Company intends to unlock the value of its non-Great Atlantic salt assets through the creation of a near-term spinout (“NEWCO”) led by a separate management team with expertise in the clean energy space.

The Company is preparing an application to list “NEWCO” on a Canadian stock exchange with details regarding a share distribution to Atlas shareholders to be announced shortly.

The ground gravity survey was completed by Abitibi Geophysics and shows a second gravity low bouguer anomaly (see image below) approximately 3 km east of the Fischell’s Brook dome where no previous drilling has occurred. This Fischell’s Brook East gravity signature is consistent with a domal body of salt approximately 1.78 sq. km in aerial size, a substantial potential salt dome. 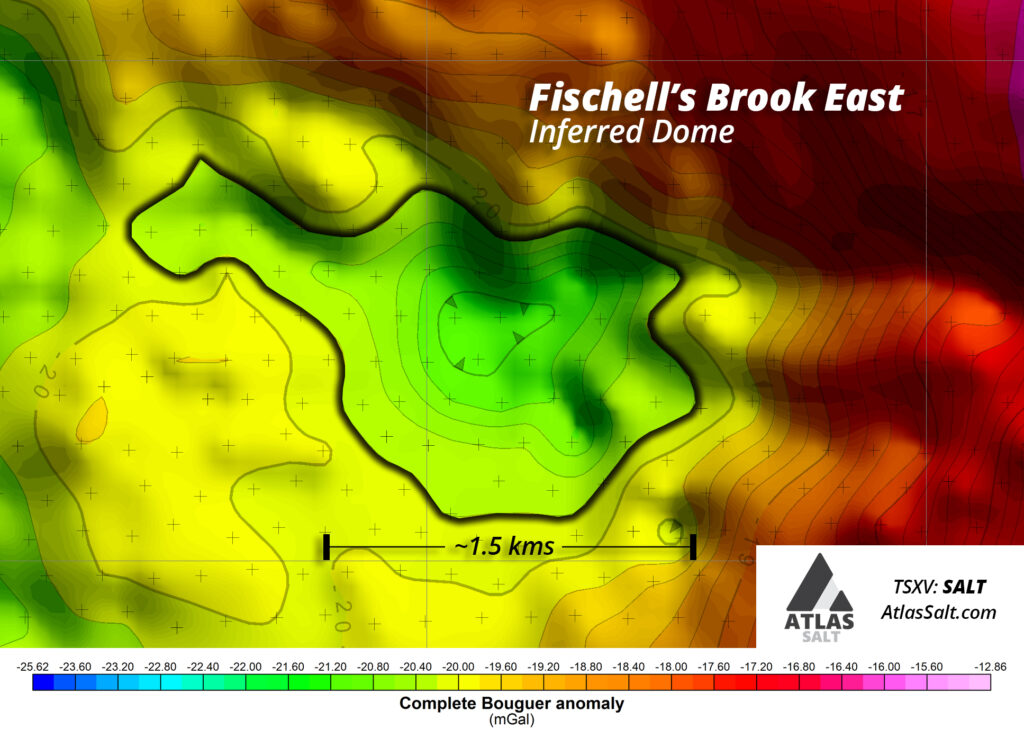 “It could be described as Elephant Country for Salt” – Atlas Salt President Rowland Howe and CEO Patrick Laracy discuss this news release with PRmediaNow’s Cyndi Edwards – click on the link below to view. 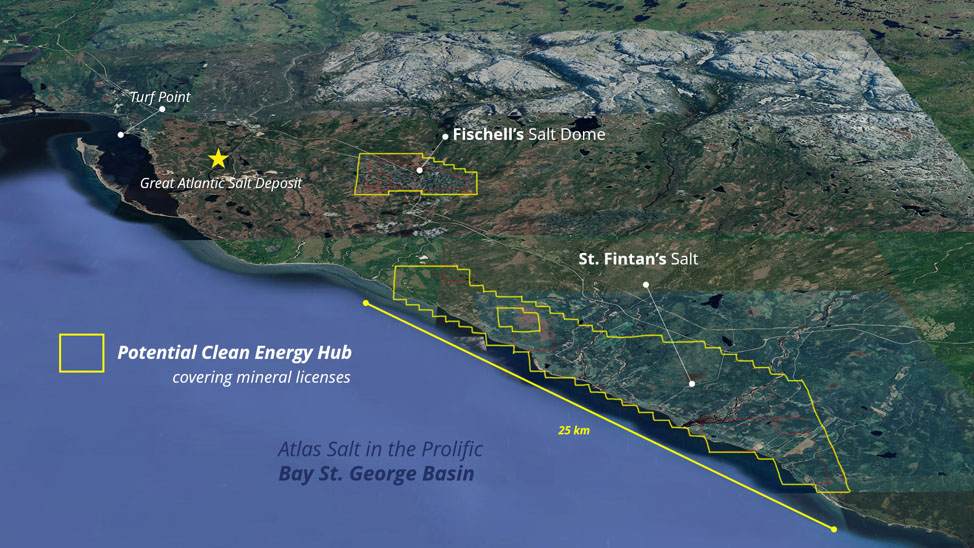 Bringing the Power of SALT to Investors: Atlas Salt owns 100% of the Great Atlantic salt deposit strategically located in western Newfoundland in the middle of the robust eastern North America road salt market. The project features a large homogeneous high-grade resource. Atlas also owns the Fischell’s Brook Salt Dome with plans to spin out that asset into a separate company as a potential renewable energy storage opportunity.